When you are about to run a marathon it is important to have enough rest beforehand and that you eat the right food. Every runner knows this.

Before the Disney Marathon I ran 3 races in 3 days, slept less than 13 hours during 3 nights, spend my whole days riding rollercoasters and stuffing my face with popcorn, cookies and other delish treats… yup, this was my preparation for the Disney World Marathon. This was what my Dopey Challenge was all about.

If you haven’t read about the first three days already, you can do so HERE. 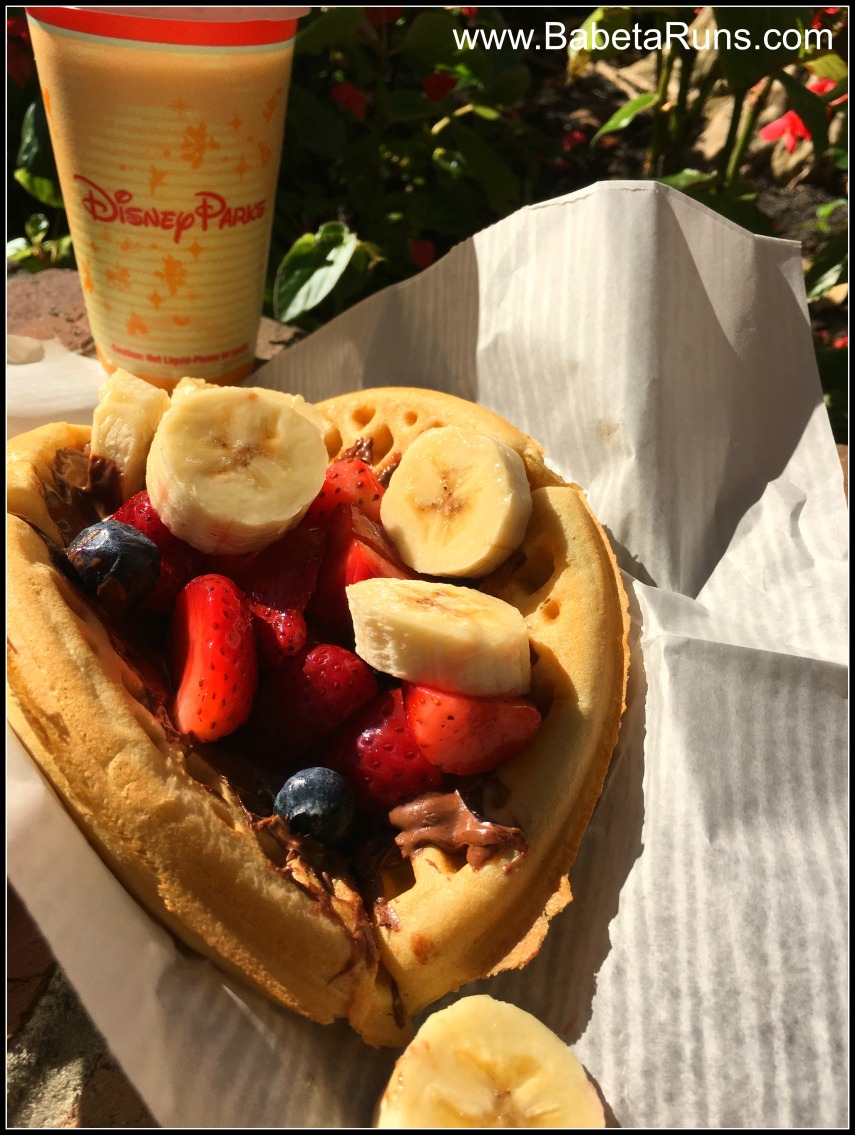 I knew that I need to get enough sleep and try to eat some “proper” food between the half and the full marathon (pasta, rice and other yummies) And this was exactly what we have planned on doing. But things never go as planned…

First came the food issue. Well, surprise surprise, we were not the only ones who thought that to have pasta before a marathon was a good idea. Disney Springs was packed with people and all the Italian restaurants were insanely busy. We spend a good couple of hours running around in torrential rain, starving and desperately trying to find some food. At the end we found a pizza kiosk, fought over chairs with some people and ate an un-done pizza each. Driving back to the hotel we were both still hungry, cold and mildly agitated.

But it wasn’t anything till… As we were driving home from our un-successful dinner we stopped in Mc Donald’s (I know, I know but trust me we didn’t really have choices) to have some hot tea. Anyways, we were standing in the queue to get through the security gate to our hotel when suddenly our car stopped working. Yup, we ran out of petrol! It seems funny now but, let me tell you friends, neither Jens or I thought it was funny at the time. We were both hungry, cold from the rain and needing to have an early night. Hey ho… We pushed our gigantic car to the nearest parking lot, had a row in the car about whose fault it was (you would too, right?!) and then I walked to the hotel on unlit street in the rain. Jens said he will come back when he finishes his tea in the car and when it stops raining. 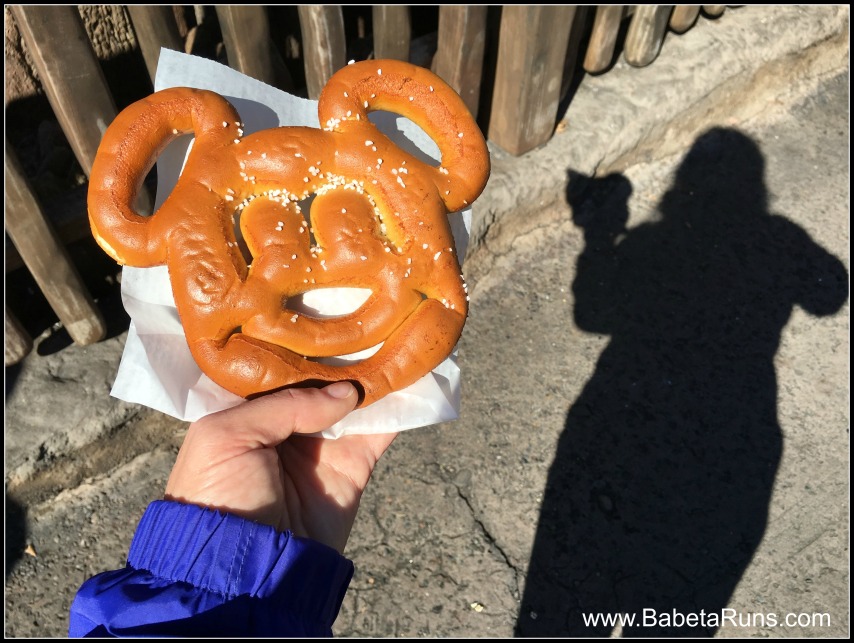 I waited an hour and then I got a text from Jens that he is at the petrol station getting petrol. Great! And then I waited another hour, and then another hour… by the time Jens got home it was close to midnight and I was genuinely worried. What happened? So… Jens got to the petrol station, filled a canister with petrol and wanted to catch the bus back to our hotel as the concierge in the hotel suggested. But, in a nutshell: the bus driver didn’t let him on the bus, the security got called and then also the police came and they all probably thought that Jens was a terrorist wanting to blow up the bus. At the end a taxi drove Jens to our car so he could fill up the tank and get back to the hotel. But it was pretty dramatic as you can imagine.

At the end we went to sleep after midnight and we slept about 3 and half hours. Hmm! 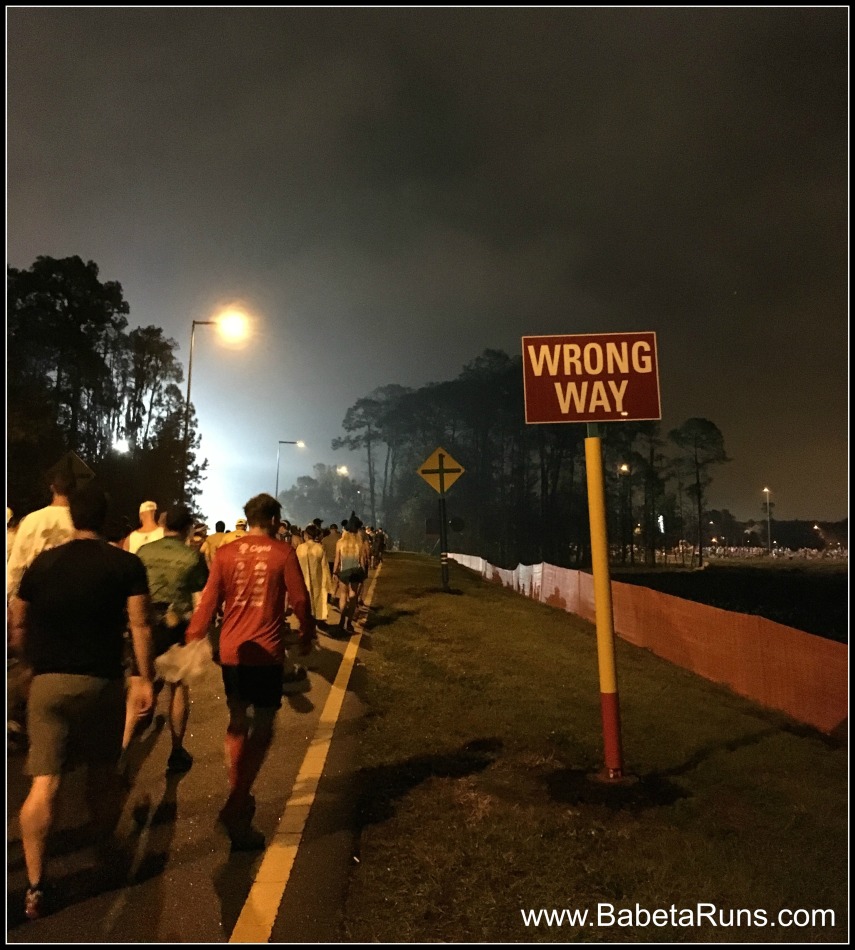 After 3 and half hours of sleep, still feeling hungry and super tired we caught the bus to the start. When we saw the above sign on our walk to the corral we had to laugh. What an epic beginning of a marathon! Haha!

It’s funny how much can the surrounding and atmosphere make you excited and ready for a run even though you are dead tired and the only thing you fancy is warm bed. By the time we heard the national anthem and saw the fire works, which set us off for our run, I was READY to run. I knew it’s not going to be easy but I was looking forward to it. 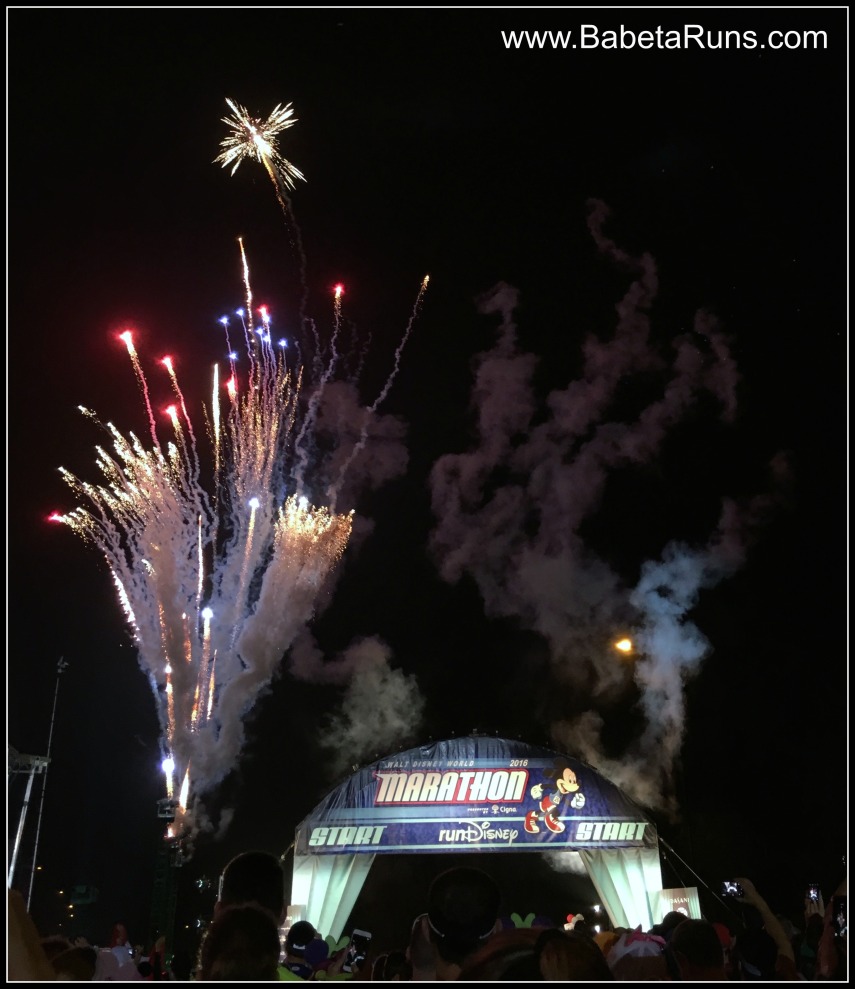 After 5k I had to go pee (I know, too much details but) I’m so happy I did. Because when we were queuing up for the loos Michelle and Alan ran past. Yay! And at the end we ran pretty much the whole remaining 37k together! It was amazing to have company! We ran, walked, chatted, I was dying, then not dying, then swearing, then super excited, then dancing and happy, then swearing some more and cursing myself for signing up for this thing … you name it, that’s how I probably felt during the run.

The first half of the marathon was the same one as the day before during the half marathon. Again we ran through Magic Kingdom and saw the lit up castle (lush), then the route changed and we ran to Animal Kingdom. When we entered the park there were REAL animals along the way and I think I might have fallen in love with the pigs! So pink! I think I need a pig in my life! In fact, I think everyone needs a pig in their life!

And then we ran to the ESPN World of Sports. It was really cool to run on a track and in the stadium. This was about 30th km and I started to feel pretty knackered. If I haven’t felt to tired I swear I would have done a little cheeky interval run on the track. We agreed with Michelle that this was the slowest track speed we have ever done! But actually, I did run on this track. In my head. And I was super damn fast during this one :)

And yes all the marching bands were pretty cool too!! 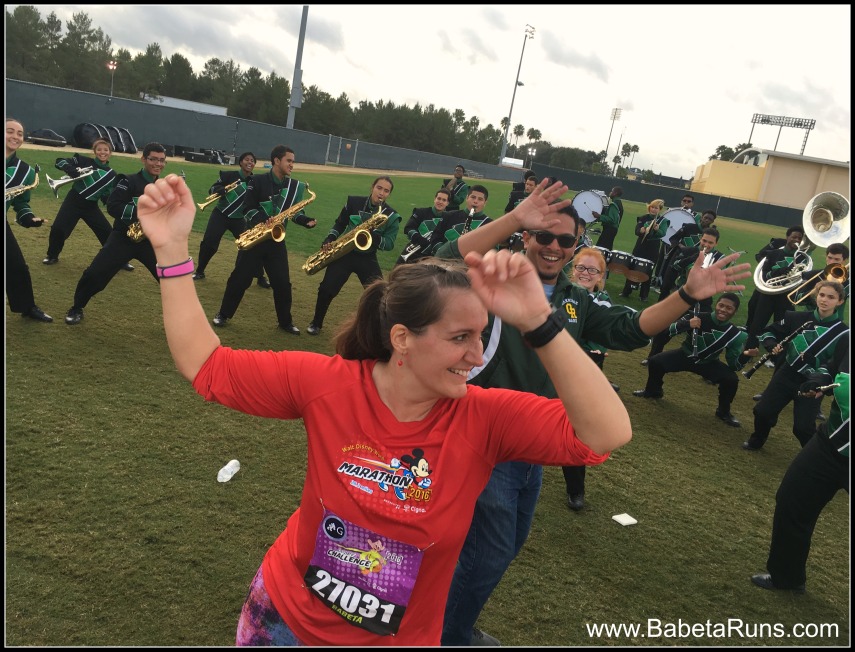 From World of Sports we ran to Hollywood Studios. I’m almost ashamed to say that I did not see Star Wars. Ever. Not a single episode. But even without seeing it I enjoyed seeing the creatures from the films and loved a “light and disco” tunnel we had to run through. And they gave us chocolate in Holywood Studios. Real one! And whoever gives me chocolate I love so, clearly, I loved running through Holywood Studios.

And then it was the last few k’s in Epcot park. Have you ever ran towards finish line with an American cheesy happy end film music stuck in your head? You know, the type when the hero saves the whole world and everyone is super happy? Guess what! We had that for real! I was pretty much ready for the finish line by the time we got to the park. In fact, this is a massive understatement: I was PRAYING for the finish line BUT when we ran along the lake in the park and the “superhero” music was blasting loud I really did feel like a super hero! What a FAB way to finish!!! 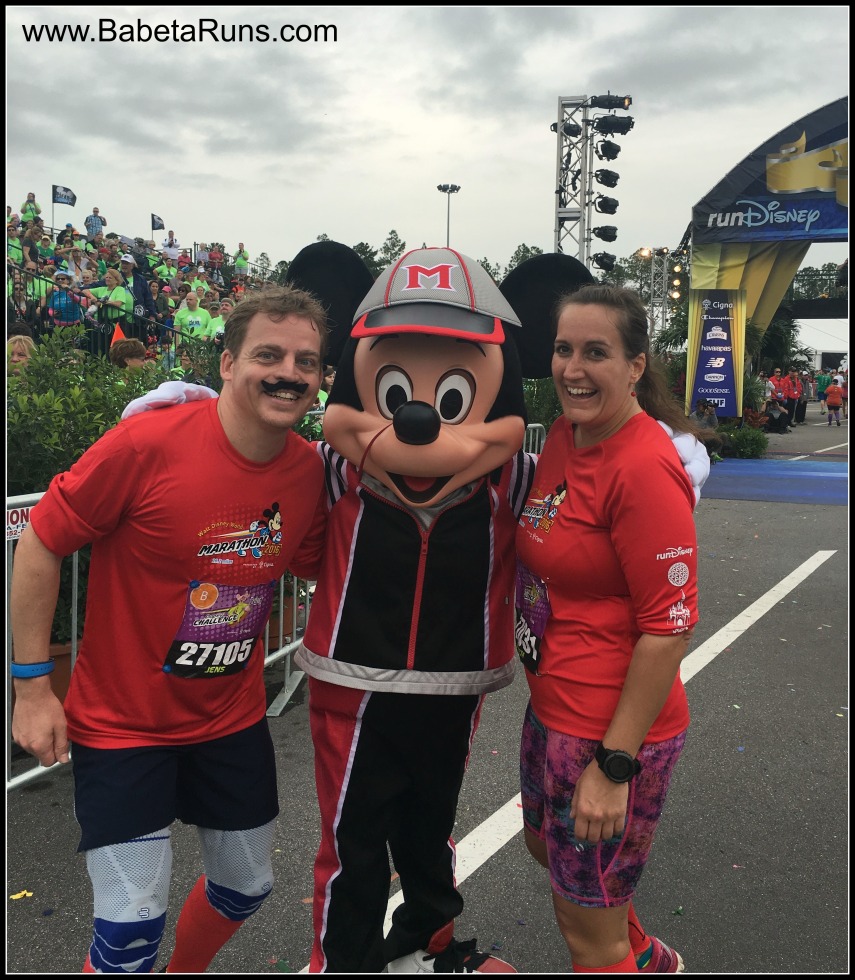 Just before the finish line we stopped to take a picture with Mickey and then we finished. Yay! And in the finish we met up with Michelle and Alan, took some pictures with Dopey and, most importantly, went for a beer!!! It tasted amazing! It always does! 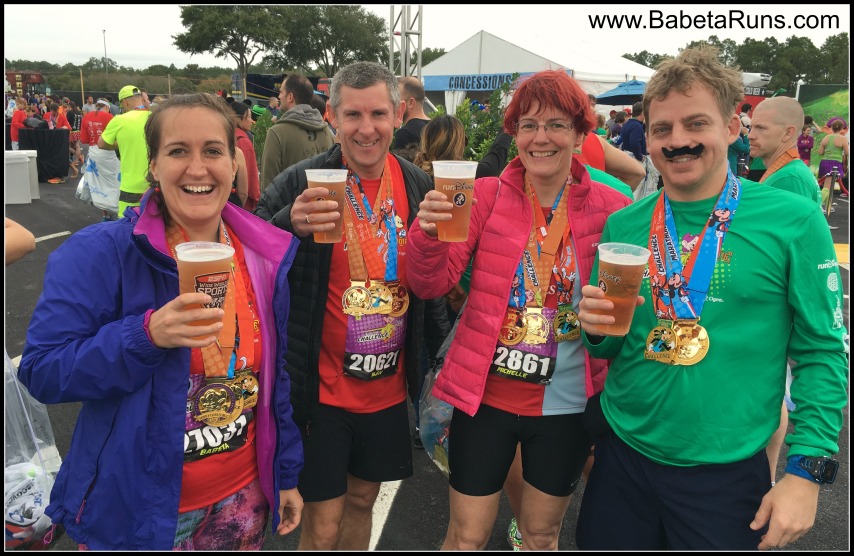 Would I do this again?

Probably not… but I am happy I experienced it. The atmosphere was great, all the volunteers were amazing and everything was super well organized.

If you are a Disney fun and a runner then I think you should definitely do a Disney run because you will LOVE it! And especially the Dopey Challenge! It is a challenge for real!

If you are a runner but, same as me, have only seen one or two Disney films (because you were with friends who wanted their kids to be quiet so they put films on) then I think you can miss this one.

But if you have the spare 550 dollars for the enter fee (this is how much Dopey costs) and you are in Florida anyways, then you may as well do it. It will be an experience. I promise you! 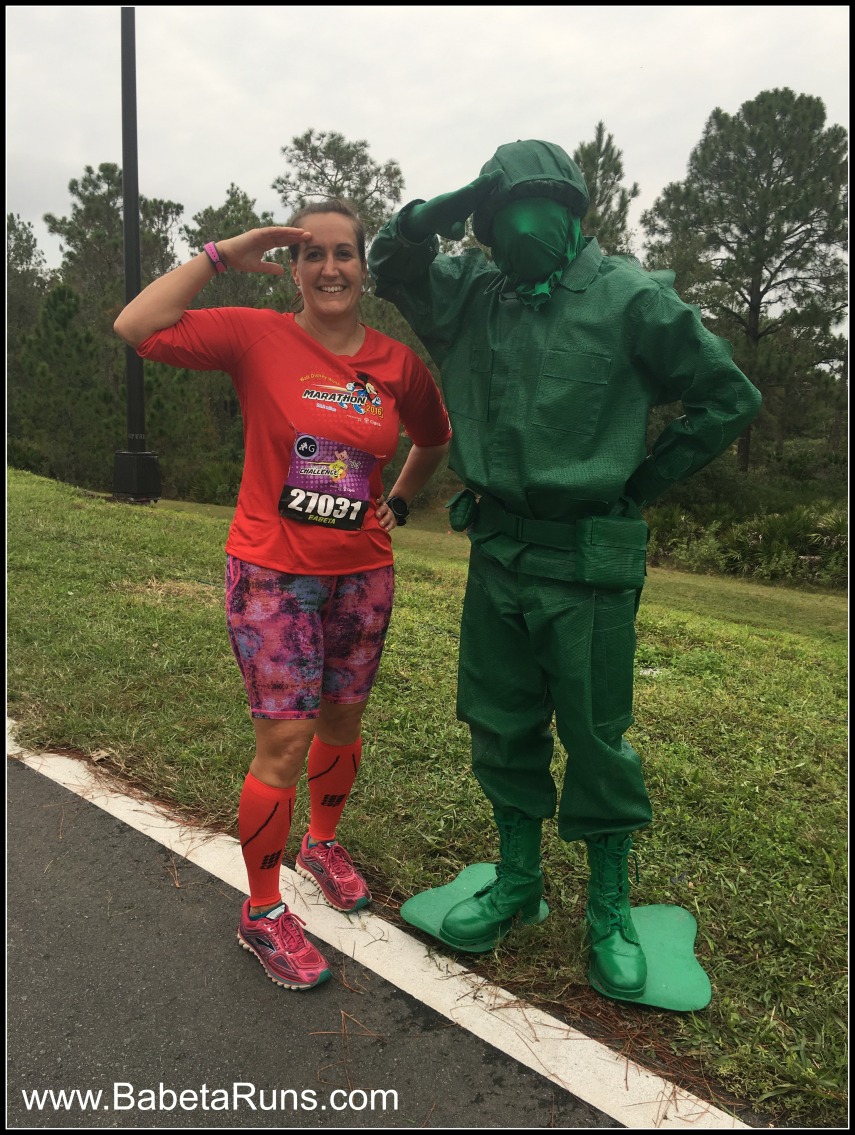 How many Disney films have you seen?

Are you tempted to do a Dopey Challenge?

Have you ever run a marathon on 3,5 hours sleep?

P.S. Friends, never let the tank of your rental car run low… you don’t know how many miles it still has on. It can turn out that not too many…

P.P.S. If you really hate mornings than NEVER even think about trying to do this malarkey because the four 3:30 am start could actually kill you. They almost killed me!

P.P.P.S. Don’t let the pictures fool you. Below is how I really felt and looked mostly during the 42k… :) 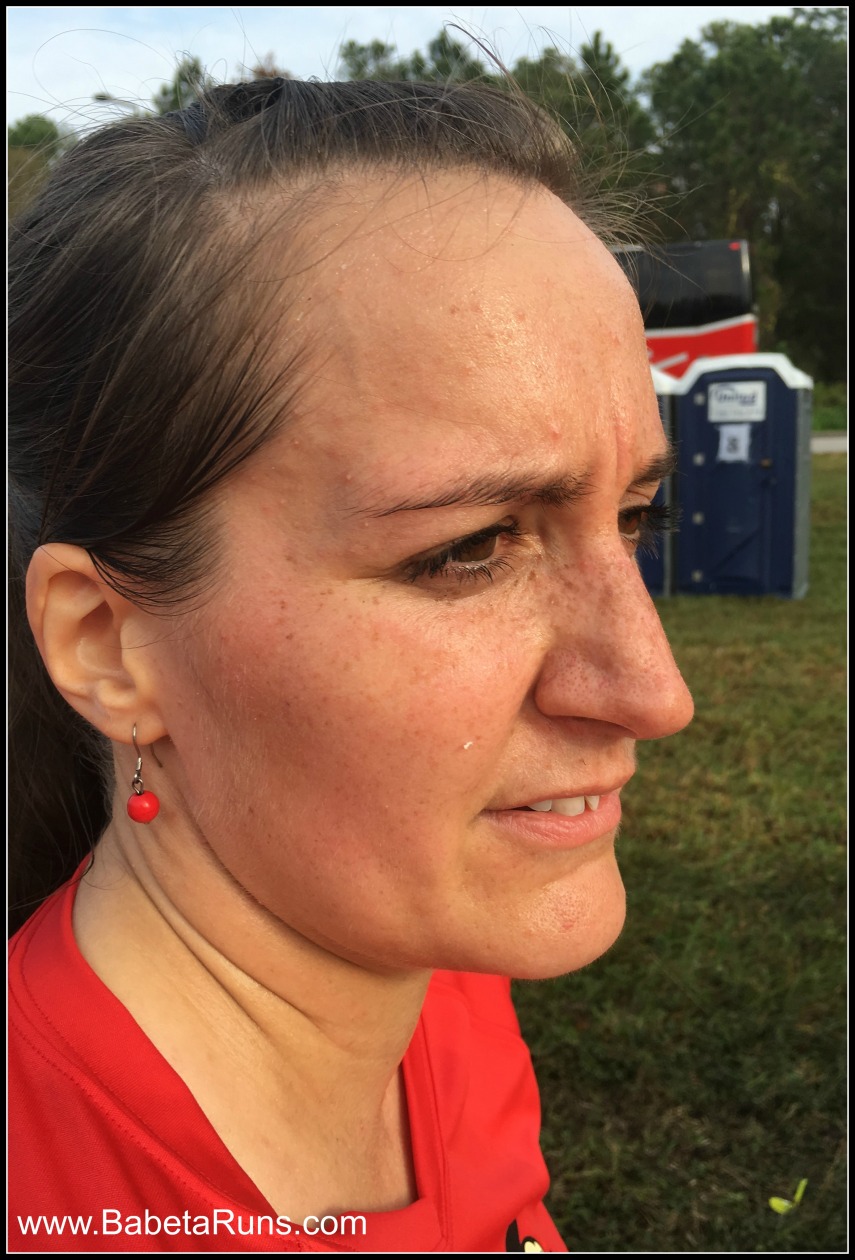 What do you want to read about: